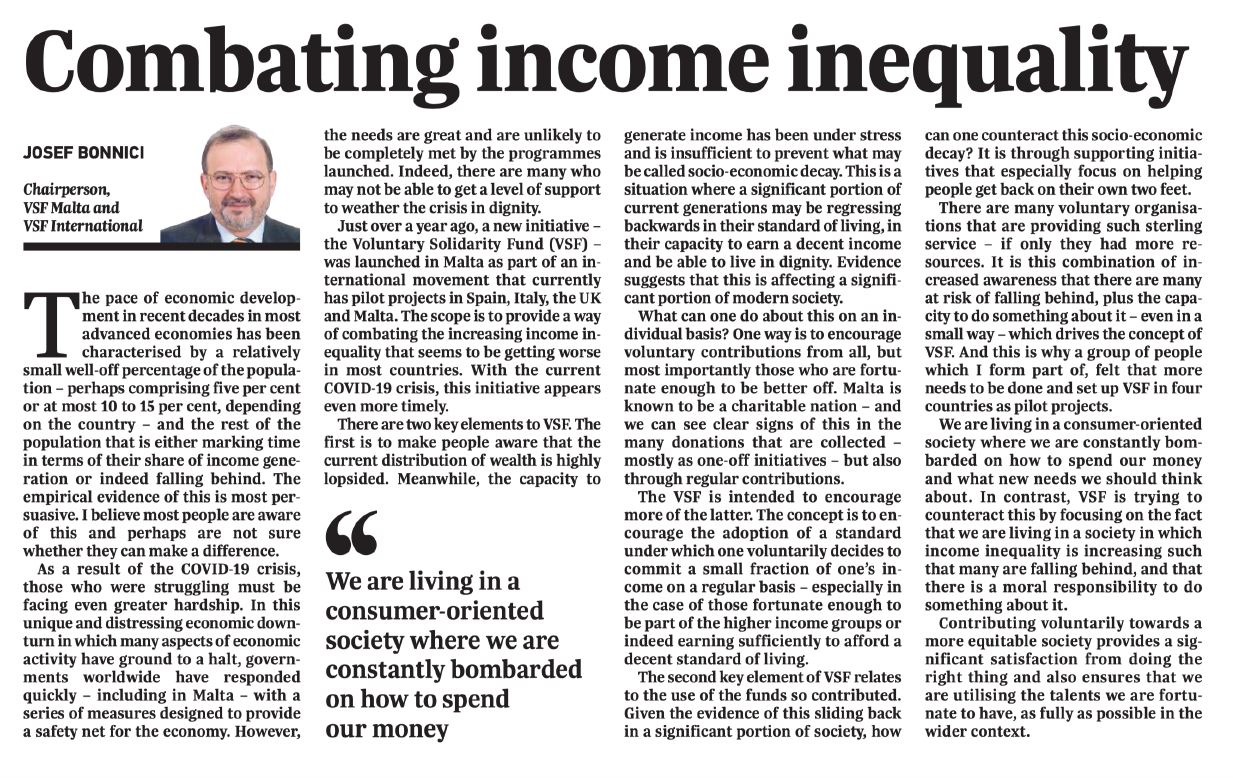 The pace of economic development in recent decades in most advanced economies has been characterised by a relatively small well-off percentage of the population – perhaps comprising five per cent or at most 10 to 15 per cent, depending on the country – and the rest of the popu­lation that is either marking time in terms of their share of income gene­ration or indeed falling behind.

The empirical evidence of this is most per­suasive. I believe most people are aware of this and perhaps are not sure whether they can make a difference.

As a result of the COVID-19 crisis, those who were struggling must be facing even greater hardship. In this unique and distressing economic downturn in which many aspects of economic activity have ground to a halt, governments worldwide have responded quickly – including in Malta – with a series of measures designed to provide a safety net for the economy. However, the needs are great and are unlikely to be completely met by the programmes launched. Indeed, there are many who may not be able to get a level of support to weather the crisis in dignity.

Just over a year ago, a new initiative – the Voluntary Solidarity Fund (VSF – was launched in Malta as part of an international movement that currently has pilot projects in Spain, Italy, the UK and Malta. The scope is to provide a way of combating the increasing income inequality that seems to be getting worse in most countries. With the current COVID-19 crisis, this initiative appears even more timely.

There are two key elements to VSF. The first is to make people aware that the current distribution of wealth is highly lopsided. Meanwhile, the capa­city to generate income has been under stress and is insufficient to prevent what may be called socio-economic decay. This is a situation where a significant portion of current generations may be regressing backwards in their standard of living, in their capacity to earn a decent income and be able to live in dignity. Evidence suggests that this is affecting a significant portion of modern society.

What can one do about this on an individual basis? One way is to encourage voluntary contributions from all, but most importantly those who are fortunate enough to be better off. Malta is known to be a charitable nation – and we can see clear signs of this in the many donations that are collected – mostly as one-off initiatives – but also through regular contributions.

The VSF is intended to encourage more of the latter. The concept is to encourage the adoption of a standard under which one voluntarily decides to commit a small fraction of one’s income on a regular basis – especially in the case of those fortunate enough to be part of the higher income groups or indeed earning sufficiently to afford a decent standard of living.

The second key element of VSF relates to the use of the funds so contributed. Given the evidence of this sliding back in a significant portion of society, how can one counteract this socio-economic decay? It is through supporting initiatives that especially focus on helping people get back on their own two feet.

There are many voluntary organisations that are providing such sterling service – if only they had more resources. It is this combination of increased awareness that there are many at risk of falling behind, plus the capa­city to do something about it – even in a small way – which drives the concept of VSF. And this is why a group of people which I form part of, felt that more needs to be done and set up VSF in four countries as pilot projects.

We are living in a consumer-oriented society where we are constantly bombarded on how to spend our money and what new needs we should think about. In contrast, VSF is trying to counteract this by focusing on the fact that we are living in a society in which income inequality is increasing such that many are falling behind, and that there is a moral responsibility to do something about it.

Contributing voluntarily towards a more equitable society provides a significant satisfaction from doing the right thing and also ensures that we are utilising the talents we are fortunate to have, as fully as possible in the wider context.

Josef Bonnici is chairperson of VSF International and VSF Malta.